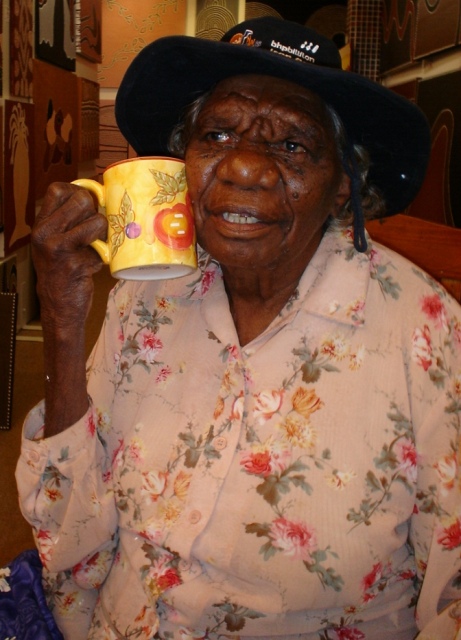 Nellie was born on Sturt River Station near Gordon Downs. Her language is Walmajarri.  She grew up in the area and worked in the station homestead doing domestic duties, then moved on to Nicholson to work for Mrs. Hill.  She obviously enjoyed this work as she speaks fondly of this period of her life.  She then travelled to the Northern Territory, Mistake Creek and Spring Creek Stations.

Nellie now lives in Kununurra with her friends and family.  Her late husband was George Wallaby, a well known artist and former stockman.  She paints topographical landscapes of her home country and the many places she and George have seen, as well as beautiful depictions of Women’s Ceremony sites…always with a paint brush in one hand and “a cuppa tea and biscuits” close by.

Nellie continued her painting career after she lost her husband, and is now a much sought after artist, a Traditional Elder of her country, and her works are held in the best private and corporate collections Australia and worldwide.

She has participated in joint exhibitions throughout Australia in company with International Artist Nancy Noonju (dcsd.).

In 2001, Nellie, along with senior Aboriginal artists/Elders George Wallaby, Violet Campbell and Billy Thomas made a significant contribution to an in depth study regarding the history of Borragoo – Lake Gregory Region for the Australian Government.  Focus was on the cultural significance and dreamtime history of the lake and the arrival and effect of white settlers in the area.