The earliest Aboriginal artists were part of close-knit group of Aborigines living on the pre-European settled Australian land. They were completely isolated from the rest of the world for tens of thousands of years. Within that time, they had their own system of beliefs and customs practiced and preserved through ceremony, mythical stories and art.

The Aboriginal culture is known to be one of the longest surviving cultures in the world. Not only is the art considered to be ‘artistic’, it is also ‘anthropologic’. The earlier works from aboriginal artists were found on rock walls, painted on their bodies for ceremony or drawn in the sand or dirt. The symbols carried stories and spiritual value. The 1970’s marked the beginning of Aboriginal art on canvases and boards.

In 1937, the most popularly noted artist was Albert Namatjira who was an aboriginal watercolour painter. His first exhibition was in Adelaide. The Papunya art movement also marked an important turn in the history of Aboriginal art. Art teacher Geoffrey Bardon taught children to draw and paint stories depicting the Aboriginal culture. The men in the community were intrigued by the fact that a white man was interested in their culture and soon a mural was drawn on the school wall. It later on led to the incorporation of a large group of artists and over 1000 paintings being created. 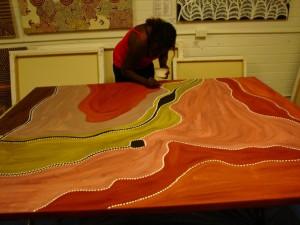 Throughout history, the Aboriginal population suffered through dark times of racism and prejudice. Today, the growth of appreciation in the art created by many old and young indigenous Aborigines is worldwide.

Aboriginal paintings can be found in museums and galleries around the world. One of the first large  breakthroughs for contemporary Aboriginal artists took place in 1981 when Clifford Possum and Tim Leura Tjapaltjarri had their artwork accepted in the Australian Perspecta exhibition of the Art Gallery of New South Wales.

In 2007, an artwork by Clifford Possum Tjapaltjarri was sold to the National Gallery of Australia for a record $2.4 million.

Aboriginal artists today are more widely respected for their work than ever before.