The Kurrirr Kurrirr Ceremony story is based on a series of dreams which came to Rover Thomas early in 1975, after the devastation of Darwin by Cyclone Tracy on Christmas Eve in 1974. This tragic event was reported World Wide.

Rover’s first dream was from the spirit of Yawayimiya Nakarra, a woman who lived at Turkey Creek (Warmun Community). In Aboriginal way, she was regarded as one of Rover’s mothers, although she was not a blood relative. She had recently died in a motor vehicle accident at a creek crossing south of Warmun (Tawurrkurima).

This woman is not named in the Kurrirr Kurrirr ceremony but her identity is known to the people of Warmun. She was returning home to Doon Doon (Dunham River Station), to the north of Warmun, from Halls Creek. The car skidded on a road flooded by rains caused by Cyclone Tracy to the northeast.

The woman was taken to Wyndham Hospital 300 kilometres further north. She was then flown to Royal Perth Hospital as her injuries were very severe. However the old woman died while being transported to Perth by the Royal Flying Doctor Service. Rover stated that the woman’s spirit told him the manager of Mabel Downs Station had warned the people driving the old lady in the car which had the accident not to go on because of the amount of water on the roads, but they didn’t believe him.

At the time of her death, the plane was apparently almost over a dreaming site (Tjintiripul) near Derby which was associated with the Rainbow Serpent. This Rainbow Serpent features a great deal in the Ceremony and was said to have caused the road accident that killed the old woman. The Serpent is very important in the Kitja culture. Two serpents (Wungkul) are often depicted on the Ceremonial Headboards, possibly meaning this powerful creature is everywhere. 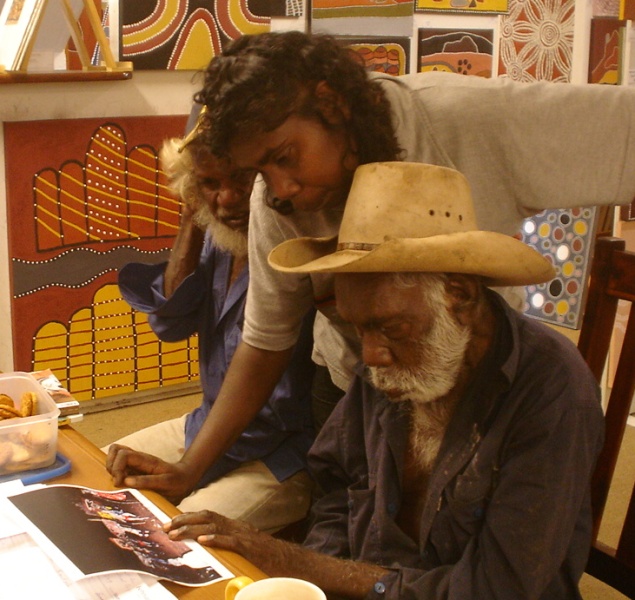 Churchill Cann and Beerbee Mungnari (both have danced the corroboree) with Charlene Carrington, discussing designs for their artworks

Rover Thomas stated that each time the old woman’s spirit came to him in a dream, he became ill. She first told him she had come back she had been in an accident and she wanted to give him the story for a corroboree. She said the snake had been to blame and she had been killed at a junction called Wungkurr and that’s where the snake tangled up the car. It was a mystery as to why she gave Rover the story, as he was not from the Warmun area, but a Kukatja skin man from the desert country well south who had lived most of his life in the Warmun area in the East Kimberley.

The corroboree and the songs given to Rover Thomas depict the journey of the woman from the dreaming’ site near Derby over which she died in the aeroplane, right back to her own country. She introduces other spirits who joined her during her journey, such as Juwarri or Devil Devil; Jimpi an old woman, long deceased, from Dunham River and Maginta an elderly woman spirit from Mt Cockburn near Wyndham.

The Devil advises and describes to the old woman the names and songs of the countries and sites as they travel on their journey, which is through most of the Kimberley area. Because of the vast distances travelled by the old women’s spirit, the corroboree could be danced at a number of places throughout the Kimberley.

The songs are in different languages and it is thought that because of this, the many tribes in the area were brought together and Aboriginal Culture was revived and the people were close again to their country. The Ceremony was hailed as a rebirth of traditional ceremonial life in the Kimberley area. 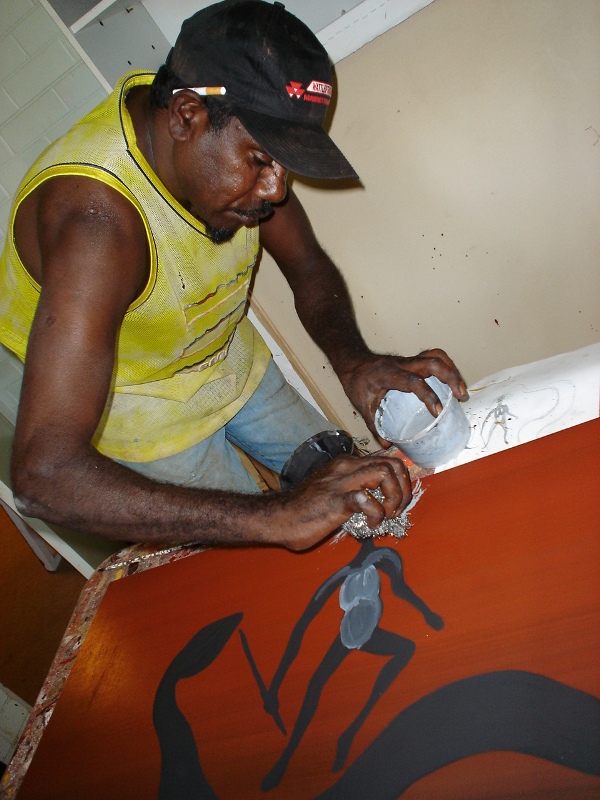 Mark Nodea, using his secret special technique notice his freehand drawing (above the artwork) prior to executing in ochre

The main themes/characters of the corroboree are Wungurr/Wungkul the Rainbow Serpents who caused not only the death of the old lady but the cyclone in Darwin; Juari (the woman’s spirit); Jimpi and Manginta the Devils; Tawurr the Half Kangaroo at Kanmanturr; many landscapes of the journey including Kanagantja (Mt. King) the site of a massacre of Aboriginal people (the shadow coming down); Cyclone Tracey; Warmun Community where the old woman had lived; Yillimbirri where the Devil and the old woman see a big hill and a cave and the old woman knows she is near her country; Mount House, depicting a big swamp [Jilili]; Elgee Cliff [Kanmanturr] where the old woman finds’ the half kangaroo, the legendary inhabitant of this place;

The Devil Devil accidentally kicking a Dreaming stone, the metamorphosed remains of the legendary Possum; Mijarrma [Clara Springs, Ada Vale Station] where Jimpi talks about the corroborree for the old woman. Rugan [Crocodile Hole] where Jimpi warns the old woman not to jump into the water as the Rainbow Serpent is there. An old man had nearly drowned there before; Pangkalji [Pompii’s Pillar], home of the legendary Bat (Pangkalji) and Blue-tongued Lizard. Lumuku, at the Lissadell turn-off and there is a big rock which Jimpi gives the name for that place.

She calls out’ Juwarri Juwarri’, to a hill near the Bow River bridge. Jimpi gives the name for that place. It is Lulumalulu. Lulumalulul is a Dreaming (Narungani) man. He sat there a long time ago watching the Kangaroo (Marlu) and Dog (Julan) near the River. The stone is that man now. They come to Wungkul (Wangkul), the junction at Turkey Creek where the old woman had her accident. She finds the Snake there.

They come to that place where the boy from Derby had been initiated at Turkey Creek. That place is called Wulangkuya. At Mount Cockburn, near Wyndham they meet another tribe. Here they meet Manginta, another Devil Devil. Jimpi looks back and says that she will have to go back from where she has come. They go to Nine Mile, near Wyndham. They see the Dreaming Kangaroo. They make a song about it.

They pass near Pukulmirri [False House Roof Hill] and Jukulmirri [House Roof Hill], large Dreaming hills on Carlton and Ivanhoe Stations. They continue making songs as they go. Looking across from Kununurra they see that Tawun [Darwin] has been flattened by the cyclone. The Rainbow Serpent destroyed Darwin.

The corroboree has been performed in many parts of the Kimberley and Arnhem Land in the Northern Territory. In 1983 it was performed at the Aboriginal Arts Festival in Perth, and in 1998 as a tribute to Rover Thomas after he passed away at the opening of NATSIAA (National Aboriginal and Torres Strait Islander Art Award) in Darwin.

It was performed at Hector Jandany’s funeral in October 2006 at Warmun as a tribute to Jandany’s role in the Warmun art movement. It is believed that the corroboree was possibly sold to the late Tiger Moore, a Worla skin man from Doon Doon Station, the dead woman’s son. 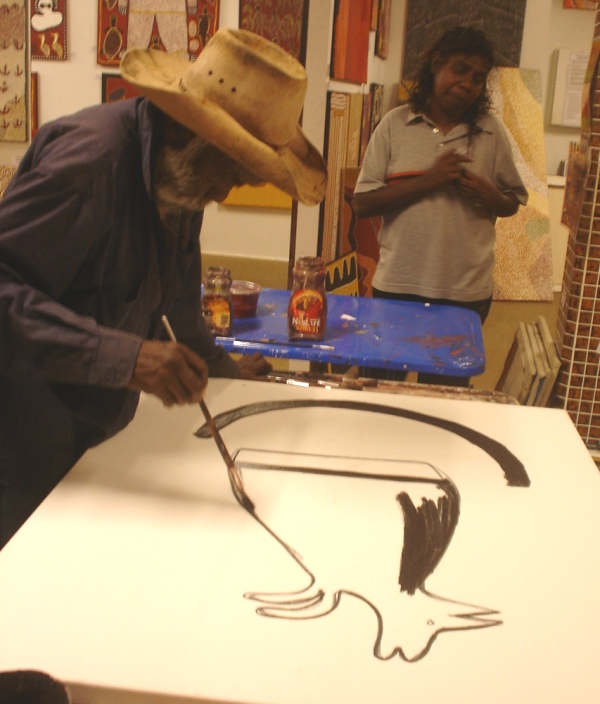 Charlene studies the Old Master, Beerbee, outlining the design so well known to him