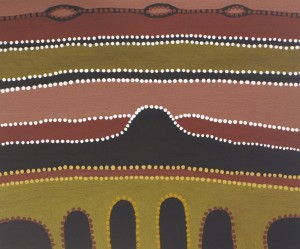 It’s ancient. It’s indigenous. It’s artistic. It’s Aboriginal art from the Australia’s Aborigines. The Aborigines migrated to Australia over 50,000 years ago and brought their rich tribal culture, spiritual beliefs and art. According to the 2011 Census, there are 548,370 who consider themselves to be Aborigines, which is 3% of Australia’s population.

Aboriginal Art is a very sacred form of art because it carries so much value to the Aborigines. Up until several decades ago, an artist had to be granted permission in order to paint a specific story in their art, especially if it contains sacred or secretive details. In addition, if the story was not a part of the artist’s family lineage, they were typically not ever permitted to paint the story. Although this practice does not strictly apply to contemporary artists today, it is still largely followed, and definitely demonstrates the sacredness of this art form.

Aboriginal art is heavily based upon the ancient stories of the Aboriginal people. For example, the stories found in most artistic works, also known as Jukurrpa (Dreamings) in the Central/Western Desert of Australia, are sometimes filled with symbols of ‘the Dreamtime’ period, which represents the creation of the world. These stories are over 50,000 years in age and have made their way through many generations of Aborigines.

Visual art has been used by the Aborigines to teach. The symbols in the paintings are also interpreted differently depending upon who is being taught. The story behind the same exact painting can actually have a more in depth explanation when being told to an adult versus a young child. While a story may have a heavy emphasis on education and behaviour when being told to child, it can on the other hand, also have an emphasis on moral value when told to an adult.

Since the early Aborigines did not have a formal written language, Aboriginal art was their written language and it contained their history. The visual art portion of Aboriginal art includes rock art, bark paintings, body decorations, wood sculptures and sand sculptures. The art is comparable to an encyclopaedia that is filled with the rich history and details of the people.