The collection and use of the didgeridoo has become popular world-wide as a new challenge for the private person wishing to become proficient at playing an indigenous musical instrument (made accessible by the many books, CD’s and DVD’s available for instruction) , right through to the professional musician wishing to create a new “sound” or image for his work. 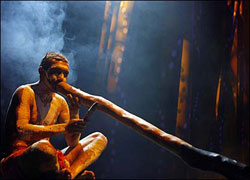 Artlandish Aboriginal Art offers Authentic didgeridoos. These are made in the Kimberley region, and the distinctive artwork on the didgeridoo stamps the mark of the maker. For instance, Ju Ju Wilson (whose prize didjeridoos are from GOLDEN Woollybutt) does not smooth out the natural knots in the wood – rather she transforms them into turtles, goannas, snakes – she is an artist as well as a craftsperson, and her didgeridoos are distinctive and much sought after. Biddy Simon from Marralum Community paints her didjeridoos with strong strokes and symbols of her own culture. Morton Sampi from Doon Doon presents his with matching clapsticks, also painted but meticulously finished with a smooth, professional technique.

Didgeridoo were painted mainly for ceremonial use – many of the best didj players – in particular the late Timmy Timms – preferred unpainted – for any and all occasions.

He was a tall man, and the didgeridoo he played was long – we remember his sitting, one leg under his body, the didgeridoo reaching from his mouth long past the length of his leg. To have witnessed his playing to the dancing and singing of his full sister Peggy Patrick is an experience not to be forgotten.

Our range includes unpainted didgeridu’s, polished and preserved, as well as hand painted didgeridoo’s – guaranteed as always – and totally Authentic!