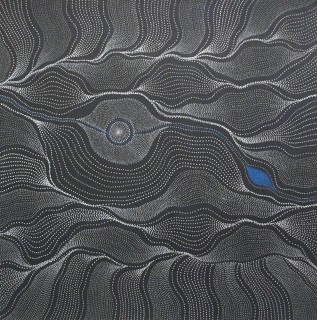 No white man could ever be so clever as to propagate, negotiate, advertise and launch such an undertaking no other people other than our Australian Indigenous people could be capable of such a feat.
Of course, it is relevantly new in the history of collectable art – of course Aboriginal Painters and Aboriginal Communities are employing curators to exhibit their art – but DEVISED and NEW AGE are not relevant adjectives.
The best team of writers in the Walt Disney Enterprise could never, never, create the stories, characters, charm, situations, mystique and authenticity of the works which our Indigenous people have in the past and still are, offering to the world.
It is inherent in our Aboriginal peoples’ culture to observe, to endure, to live in harmony with their Mother land, to use the gifts she offers, to share them amongst the family, to guard the land on which they depend, to abide by the beliefs and tradition passed on to them, to obey the wisdom of their elders and the stories of their Dreaming all this is what we are privileged to perceive in Contemporary Aboriginal Painting and Artefacts.

The very nature and beliefs of Aboriginal people are in themselves proof of authenticity of the product. This relates to their paintings, carvings, weavings, storytelling, musical instruments, weapons and tools. The strict rules relating to their own particular country, the associated landmarks, the Dreamtime stories and dances celebrated and “owned” by a particular tribe are proudly depicted in their artwork.
We can quote many instances where we have witnessed the honesty and integrity of professional Aboriginal artists. We remember in mid 2002, when Sade Carrington was painting in our Gallery a visiting Anthropologist from a University in North America was in the Kimberley to study the Halls Creek Crater from the Indigenous people’s viewpoint. She asked Sade if she had knowledge of the country and the crater.

Sade replied that she knew it very well. When asked to paint the Crater, Sade politely said “Oh, no I couldn’t do that it’s not my country”. She did not hesitate she refused a commissioned artwork without even thinking of monetary gain. She is of Kitja skin we sent a message out on the “bush telegraph” – which still works extremely well – and arranged for Kitten Moolarvie, a Jaru lady who was born in the Halls Creek area and an excellent artist, to paint the subject. 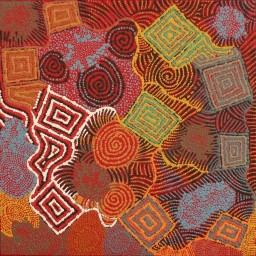 A great deal is written about names of deceased people not being mentioned, but how many people worldwide know that still, even the young, modern Aboriginal people who live and work with white Australians, abide by the old rules of not saying, for example, the name of a living relative that is inappropriate.

They will say “the father for that young one there” or the like. Taking this into consideration, a collector can be assured that a painting of Purnululu (Bungles) would be done by an Artist entitled to paint that country, a desert style painting would not be attempted by an Artist from Kalumburu. They have no need to depict other than their own country, no desire and no intention.
By the same token, the nature of interaction between tribes in a particular area, means that many Aboriginal people have knowledge of each other’s country and beliefs. Peggy Patrick looked at a Wandjina painting by Roslyn Karadada, depicting the Ponnai (turtle) and immediately sang the song relating to it. – She knew the song, but never would she paint the artwork.
We find the Artists to be not only proud of the stories of their paintings, but very truthful. Churchill Cann is extremely knowledgeable about the country he paints he is a Lawman – his stories are interesting, authentic and normally voluminous. We have to write them down or record them one could never soak up so much information about one work.

However, he recently completed a painting which was somehow “different” still with his recognisable “swirling” brush style when asked the story, he merely said “Those hills are where a big Kangaroo lived always down the bottom is where we sometimes camped when we mustered”. We waited for more nothing, so we prompted “What was the kangaroo doing there what’s the Dreaming story”. Churchill replied “There isn’t one that’s just his home”. Professional artists tell it and paint it the way it really is no embellishment, if there is none, just to satisfy the purchaser.
Churchill we keep mentioning, but it is easy to do so because, although he is not one of our most prolific painters, he is indeed memorable. He painted three small pieces for us, in company with June Peters, Sade Carrington and Sandra Sampi. When he finished, he named the first one “Lolly Spring”, the second “Pumpkin Gorge” and when we joking said “Guess this one is ‘Onion Valley'” he was totally startled.

The girls thought it was hilarious. Not Churchill he went into great detail as to why the first two happened to be named as they were. Sade knew Lolly Spring was a permanent mustering camp on Texas Downs, and one time the camp ran out of sugar for their tea for a long time hence the name. Churchill has a great sense of humour but definitely NOT when it comes to his professional painting.
We can relate this “Authenticity” even to the smallest artefact (carving of Boab Nuts), to Wood Carvings, Didgeridoo and singing sticks, Boomerangs, Spears all and every piece of Contemporary Aboriginal Art.