Bradshaw Aboriginal Art of the Kimberley

Since the discovery of this ancient Australian rock art form by Joseph Bradshaw in 1891, there has been a virtual mountain of research conducted on the subject individuals and teams of experts all with a passion to unearth the realities and origin of an art form which has survived the rigours of the harsh climatic conditions encompassing some 50,000 sq. kilometres of land from the Prince Regent River area, Kwini district, down the Gibb River Road as far as Purnululu (Bungles) have collected data and written papers comparable with other such mysteries and phenomena as the ancient Egyptians, the Incas all expounding theories as to who, when, how, why.

We applaud these people and read with interest the results of their untiring work however, in the light of such expert analyses, we can only present the Bradshaw rock art through the eyes and paintings of our Aboriginal Artists. They have lived in this area, the different tribes have passed down their own dreaming stories about the Bradshaw art in their own back yards.

The Bradshaw figures are symmetrical, mystical, beautifully depicted at times with elaborate headwear of conical shape with intricate “knotted” trails giving an almost sophisticated and elegant picture. Others appear in hunting scenes, festive dancing positions with a great deal of movement, contrasting with some rock art features creating a “shiver down one’s spine” as the viewer imagines an offensive aura which perhaps could be hunting, perhaps could be warning, perhaps could be threatening. Everyone who has been fortunate enough to view these magical images will draw their own conclusions and at the end of the day, still be amazed, perplexed, hypnotised. 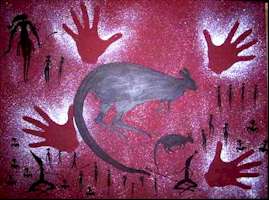 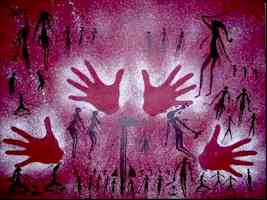 We have in our Gallery a selection of Bradshaw art by our local Kimberley Artists.

Kevin Waina of Kalumburu is a prolific painter of this style, and he has many detailed stories to accompany his work. His depiction of the Aboriginal people asking the Bradshaw God for advice about hunting, where not to go, and offering tokens of appreciation for the directives given to good and allowable hunting grounds, always adhering to the orders. Kevin’s distinctive human “hands” with the fine white “mouth painting” dots surrounding the outline show where NOT to hunt. He accompanies the forbidden hunting country with small Bradshaw images guarding the sites, and the Aboriginal people happily succeeding in the surrounding country with their food gathering.

Kevin paints the Bradshaw God Wallarwhroo (an elongated white ancestral figure) and his son, the product of a marriage with a female aboriginal of the local tribe to please the God and to encourage him to give his blessing for hunting, surrounded by Allarwhroo images and the hunters. Again, one of Kevin’s most popular works focuses on a large kangaroo in the middle of the painting, with Bradshaw figures and Aboriginal Hunters surrounding. He sometimes combines the Rainbow Serpent with the hunting scene he has endless stories and a huge repertoire of compelling designs his father handed down the stories to him and he has brought them to the artworld via his extreme painting talent. Kevin is always happy to share his stories, his views, his beliefs and is extremely “modernistic” in approach, dispelling many antiquated and incorrect ideas with regard to the relationship between the Aboriginal people, the Bradshaw Art which surrounds them along with the Wandjina carvings which he also paints.

Some of the younger painters in Kalumburu are embracing Bradshaw style in particular Monica Williams, a young mother with a brilliant future (once her children grow up). We look forward to as many of her works as she can fit in to her busy schedule, as every piece she completes lasts in our Gallery a very short time Monica’s paintings are as balanced and symmetrical as the original rock art she paints exactly as she sees it and the effect is authentic and a mirror image of the original.

Dorothy Djanghara of Kalumburu paints Wandjina and Bradshaw style, sometimes combining the two as does Kevin Waina. Dorothy’s combined works depict a co-existence between both images of the Gods in the rock carvings and her people, with an emphasis on happy and prosperous association.

And last but not least, Lily Karedada arguably the most famous of the Wandjina artists also paints Bradshaw. For years, we had no knowledge of this fact!

One afternoon, Lil was painting in house with her younger daughter Angeline we remarked that we would really like a wider selection of Bradshaw Art to present to our clients. Lily did not take any notice Angeline replied “What about Mum?”

“Lily does not paint Bradshaw”. “Of course she does” said a surprised Angie “She was the first woman to paint it”. Lily laughingly confirmed this “Yes, I haven’t done that one for looong time when I was young girl. Maybe twenty. First one I did from copying something my father showed me”. That afternoon, she completed a wonderful piece, combing a small Wandjina figure at the top of the painting with the Bradshaw figures of her country Prince Regent River. She showed them with woven hunting bags, boomerangs, spears in the same exact, professional way she always paints. She had not forgotten one detail.

Needless to say, Lily is now painting a series of Bradshaws for us in HER style as she remembers them as a child in her own playground in her own country.

We look forward to expanding our team of artists with individual Bradshaw style painting, as the carvings appear in their part of the country. Kevin Waina has offered to record stories for us and when these are available, they will form a very important part of our presentation of the…

“WORLD OF BRADSHAW ART BY OUR ABORIGINAL ARTISTS”. 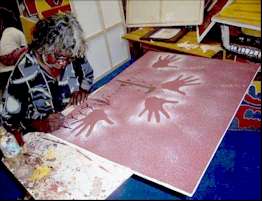 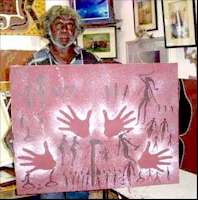