We must admit that, after a great deal of research into Boomerangs via the internet and many written articles, in order to bring to you the very best information possible, the only “usable” piece of information we came up with is that it has been proven that Boomerangs have been used in countries other than Australia. Well, not much to offer you, so we will have to run with what we have learnt from the craftspeople from whom we purchase Authentic Australian hand made Boomerangs. 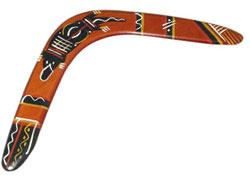 Firstly – let’s be honest and tell you – the most difficult artefact that we have found to be available to purchase is the good old boomer. Why? Because it is the most difficult and time-consuming of any indigenous artwork to make, taking into consideration its size and retail value. The first reaction we had from the people we asked was “Oh, but everyone wants to buy those pretty ones – just like you see in magazines and on postcards for Tourists”. We explained that was exactly what we did NOT want.

Then came the difficult part – the very people who can make boomerangs are painters, wood carvers, clever craftspeople. Their time can be spent in a much more lucrative way. But their generosity prevailed, and many agreed to the arduous task of making the boomerangs for us – in order to show the people worldwide what an authentic Australian Aboriginal Boomerang really is. We admit – we didn’t encourage our painters to make them – their hands must be looked after like those of a surgeon!

They are made from hard wood (ironwood in the Kimberley area) – shaped, smoothed down, sometimes “fired” as with bark for paintings and other artefacts – then treated with a preservative and finally, painted – although many of our boomerangs we asked to be presented in “natural” unpainted state, as were the “working” boomerangs, as opposed to the ceremonial ones.

Shapes differ, from the familiar “pointed” shape favoured in the Northern Territory to the type used in the Kimberley – with one side being much shorter than the other (the long side equals the throwing side which is held by the user.) Right and left handed boomerangs were always made – the back of the boomer is flat and the top side very often slightly “rounded”.

The purpose of the boomerang in the Aboriginal life was for “hitting the target”. In the event of this not happening, it landed back in the “general direction” from which it was thrown, providing nothing “got in its way” in the meantime. Aboriginal people possessed few tools – the ones they had, were put to good use. Primarily, the boomerang was used by the men for hunting animals, as was the digging stick used by women for food gathering.

There was a second use for the boomerang – fighting. It is indeed a lethal weapon in skilled hands. We are not talking about hundreds of years ago – one of our painters, Jock Mosquito, explained the very deep scar on his head. He told us that when he was a teenager on Nicholson Station, he and others went to help fellow workers who were engaged in a dispute. Jock said he stopped a couple of boomerangs directed at him with a shield, but the third broke and the short side cut into his head. They certainly were not used as frisbees!

Then there is the No.7 boomerang – shaped exactly as its name. Again, this was used for hunting, but was never made to return to the user. The point was meant to stay in the targeted animal until the hunter arrived on the scene. These boomerangs were also used extensively in aboriginal ceremonies, as were other boomerangs – for example, boy’s initiation.

They were used as musical instruments – rhythm section as with singing sticks – particularly for corroborees (Joonbas).

Because our boomerangs are individually hand crafted, no two will be exactly the same. We can present on our site images of the types of boomerangs we have – if you order two, you will see the difference, yet the similarity will be apparent as to the intended use.

Please Remember – Boomerangs are not to be taken lightly as a “play” toy – all care should be used when throwing boomerangs or any other “tool of flight”.