“Australia” is Baz Luhrmann’s first feature film since the 2001 musical success Moulin Rouge! The highly anticipated film centres on an English aristocrat in the 1930s, played by Nicole Kidman, who comes to northern Australia to sell a cattle property the size of Belgium. After an epic journey across the country with a rough-hewn drover, Hugh Jackman, they are caught in the bombing of Darwin during World War II. Filming began late April 2007 & concluded December 19th 2007.

The movie was released worldwide on the 26th of November 2008. As of April 2009, the film had grossed over $211 million and profits for the film stand at just over $133 million. The film has become the second highest grossing film in Australian Box office history. The success of the film was further enhanced after being released on DVD. In the U.S., Australia sold almost 2 million DVDs in one month which was around 80% of what 20th Century Fox predicted it would sell altogether. Since being released in Australia, the DVD has sold double what they expected.

A portion of the filming was undertaken around Kununurra where Artlandish Aboriginal Art Gallery is located. A number of Aboriginal people we know were fortunate enough to be apart of the movie.

One of them was Teddy Carlton 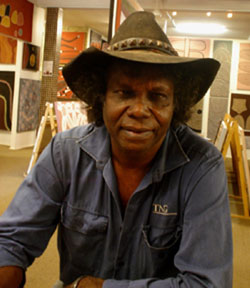 Teddy worked the whole time of the shoot both at Carlton Hill Station and Diggers Rest. He told us he was Cast Member No. 31 and he rode as the head stockman and Hugh Grant was the Drover.
Teddy said there were a fair number of locals as extra’s from Halls Creek (400 km. south of Kununurra) and stations right up to Kununurra. They were riders, children and old people.

Ian MacNamara broadcast from Kununurra on Sunday 21st of September and interviewed Ted about the movie on the radio program Australia All Over which has a huge following in regional Australia. Macca said Ted looked the epitome of an Australian stockman, which of course he was.

Over the last several months ‘Australia’ has been released around the world on DVD. The ‘DVD’ release features 2 additional scenes with the U.S. Blue Ray release including many more extra scenes and information.

– A synopsis of the ‘Australia’ film – what is the story (plot)?

– Information on the 2 extra scenes included in the DVD

– Translations for Australian words used in the ‘Australia’ movie

– Who are the actors in ‘Australia’ the movie, and what characters do they play?

– Where was ‘Australia’ the movie filmed?

…..And much more, then have a look at this fantastic website by Fiona Lake that covers the movie in great depth as well as showcasing books, cards, photographs, art, events and exhibitions.

‘Australia’ The Story by Fiona Lake

‘Australia’ does us proud

From the moment Teddy Carlton, Akubra on head, stepped from a stretched white Cadillac limousine to a backing of thunder claps and lightning strikes, everyone knew it was going to be a special night for the East Kimberley.

With the Pigram Brothers entertaining around 250 guests, and local stars such as Brendon Walters standby, young Sebastian Bilminga, along with dignitaries including federal opposition leader Malcolm Turnbull and WA Nationals leader Brendan Grylls, walking the red carpet, the scene was set for Kununurra’s night of nights.

WA Nationals leader summed up the mood of the evening saying: There are 20 million Australians that wish they were here tonight. The focus of the world is on you. This is the start of a new beginning for the East Kimberley.

Director Baz Luhrmann had a special video message for locals, saying while the Kimberley may look different on the big screen than in reality due to special effects he hoped they were pleased with the finished product.

We hope you feel we have still caught the spirit and feelings we had when we were warmly welcomed up in Kununurra, he said.

Then, with the dust settling after a rousing stampede of local horses and a welcome to country dance by the Waringarri Dancers, the spot lights dimmed and silence fell on the Kununurra Picture Gardens.

The silence was short lived, with a raucous cheer filling the air as the first canvas of towering red Kimberley escarpments flashed across the screen.

And the applause continued, every local scene the Pentecost Crossing, Ivanhoe Crossing, the Cockburns, Carlton Hill and every phrase of Miriuwung language sending the crowd into celebration.

Thankfully the thunder and lightning to the west remained distant and rather than raining on the parade it simply provided a backdrop which not even Baz Luhrmann himself could have orchestrated.

As for the movie itself, it has everything: love, war, violence, politics and cinematic masterpieces.

All agreed it lived up to its hype as an epic romance, however, it is much more than just that.

It is evident Baz Luhrmann has a deep respect for the Aboriginal people of this country and this film will be seen as a powerful statement of the effects past government policies have had on the children and families of indigenous Australians, and the shaping of our nation.

If local sentiment is anything to go by, Baz Luhrmann has done our country and its people proud. 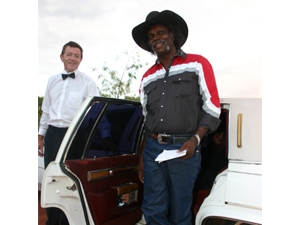 CAPTION: Local star Teddy Carlton steps from a Cadillac limousine at the Kununurra Picture Gardens for the world premiere of Baz Luhrmann’s Australia.
Link to original article thanks to the Kimberley Echo
Comprehensive Fan site about Australia- The Movie
Australia-The Movie, Hugh Jackman and Nichole Kidman featured on an Oprah special.