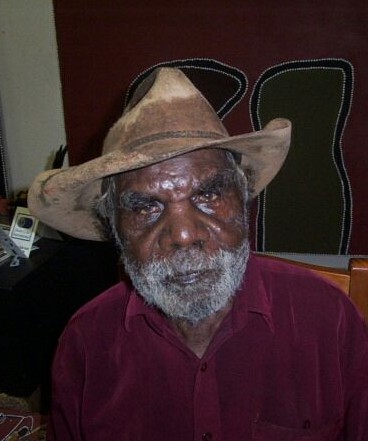 Stan was born Halls Creek c. 1933. He worked as a stockman in the East Kimberley for most of his career, and lists many prominent stations Legune, Newry, Rosewood, Argyle, Auvergne, Bradshaw and Victoria River Downs just over the Northern Territory Border. Stan has been painting for over ten years he attends the Garma Festival regularly, regarded as one of Australia’s most important cultural events. He is a highly respected Jaru Elder and known teacher of language and culture.

Through his Grandfather, he is regarded as one of the Traditional Custodians of the Wolf Creek Crater area, via Halls Creek. This area is the content of his strong, raw and realistic painting style.

Stan was instrumental in assisting Dr. Peggy Reeves-Sanday, Professor of Anthropology at University of Pennsylvania, during her visits to his country. Dr. Reeves-Sanday’s father, geologist Frank Reeves, discovered the Crater after two expeditions on land following a flight over the area, and owed his life to the local people on the last expedition. Peggy published an in-depth book on the Crater with the local people’s assistance, and collected many artworks from them which were included in an Exhibition at the University of Pennsylvania Museum of Archaeology and Anthropology which was on display until February 2005.

Stan is very well known throughout the Kimberley area, from his stockman days when he worked with so many of his colleagues who went on to become artists, for his strong cultural beliefs and love of his land and for his tremendous sense of humour. Mention his name and everyone has a story about Stan.

Churchill Cann told of the time on Texas Downs when he warned Stan not to open the gate in the yards until the horse Stan was riding quietened down Stan ignored him and was last seen in the distance in a cloud of dust on the horizon. Freddie Timms tells of the serious impression Stan makes on those who attend the Garma Festival with his endless stories of his country and his hopes for the preservation of his culture. Jock Mosquito, also a Jaru man and known to all in the Kimberley, and Billy Duncan from Inverway and Nicholson Stations, know Stan from their days in the saddle. The late Jack Britten worked with him for many years.

Stan tells the story of how he was droving in Central Queensland when he was sent a message that the boys back home on the station in Western Australia had walked off and he was without a job (the Wave Hill incident August 1966) Stan said old Lingiari did that one. Stan was at Longreach, employed by Wave Hill. He stayed on at Longreach and worked there as a stockmen, then travelled to Brisbane, where he was never without work such is the calibre of the man. He has worked with sheep in South Australia, then up to Alice Springs with cattle, Broome, Darwin and all points in between. He has visited New Guinea (too many people with not enough food was his comment). He has also spent Christmas in Germany Silly one me I was freezing.

Stan is adamant that he doesn’t want to go overseas again best to stay here with all this land all this tucker no need for a lot of money here.

Each artwork presented comes with Stan’s story in his own words and combing deep Tradition with humour and profound knowledge. He is a totally unforgettable character. As Stan would say

WE TWO FELLA SHOULD HAVE A YARN