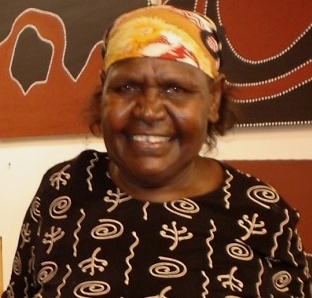 Shirley is undoubtedly one of the hardest working, most professional contemporary ochre artists and certainly one of the most talented.

Born on Mabel Downs Station, she grew up there whilst her mother Madigan Thomas was working alongside the stockmen. Like her mother, Shirley is a great organiser, strong lady and well respected Law and Culture Woman amongst her Kitja people. She has recently relocated from Warmun Community and now resides at Norton Bore Community, of which she and her husband Gordon Barney (a senior painter in his own right and former stockman – see picture below) are Chairpersons.

Shirley worked when old enough at Mabel Downs, Texas Downs and Alice Downs in the station homesteads (as she says, No, I didn’t ride horses like Mum!).

She then settled at Warmun and worked at the Post Office for many years. She has six children and many grandchildren, Shirley looks after not only her grandchildren but relatives little ones and is fastidious about the proper rearing of children and the teaching of youngsters both in traditional culture and modern schooling. When Shirley shops for her family, she practically cleans out the supermarket shelves!

It is amazing that she could possibly find time to paint, but she certainly does. Shirley has a style all of her own, her ability to blend superb ochre colours is renowned, particularly the pale blues she uses, and doesn’t mind sharing her techniques with not only the younger artists but also established artists, she is a very generous lady. The stories of her paintings in the main derive from those Madigan has told her, and her uncle, the late Jack Britten.

Shirley has participated in many exhibitions since 1994 in every capital city in Australia, as well as in London and Germany. Her artworks are valued and included in high profile collections such as the Kerry Stokes Collection and Universities throughout the Country.