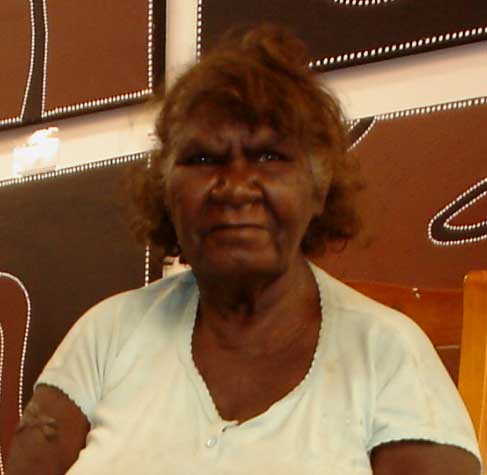 Phyllis was born at Turner River (Kartang Rija) and grew up there. Her mother was Kitja and her father Jaru (desert-way). Phyllis worked around the station, doing yard duties and assisting with the domestic goats. Whilst in Wyndham, she met her husband, Joe Thomas, a stockman. She accompanied him to Springvale, then Mabel Downs. Joe worked at Bow River alongside the late Timmy Timms for Sam and Maggie Lilly, and much later when the Government granted the station to the Timms Family, Joe was granted an excision, and developed Rugan Community (Crocodile Hole).

Joe was instrumental in setting up a school on his Community, and Phyllis taught the children culture carving, painting and dancing. Eventually the school was closed and the children attended the larger school at nearby Warmun.

Phyllis paints landscapes particularly of Crocodile Hole which is a haven for wildlife, boab trees and permanent water. She is well represented throughout Australia and her entry in the Telstra Awards 2000 was highly commended.