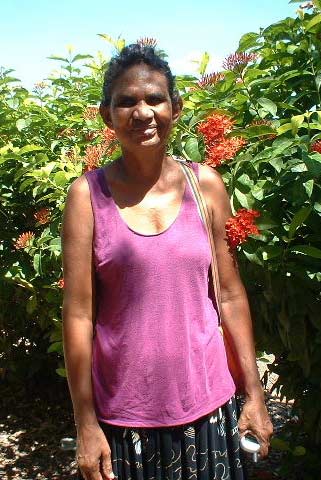 Peggy was born 1941 on Newry Station in the far north-west of the Northern Territory. Peggy’s father, Frank Moore, worked as a stockman on the cattle station. She then relocated with her mother Dianah Dingil to Ivanhoe Station in the East Kimberley (Western Australia), and attended school until the age of 15. Old Argyle Station was her next home, when she married Alan Griffiths, a stockman and drover and now an Internationally renowned artist.

Peggy and Alan reside in the largest town in the East Kimberley, Kununurra. She commenced carving artefacts in 1985, and soon after progressed to painting with the first art centre in the region, Waringarri Arts, where she is now a Senior artist and former Chairperson. Peggy is also a member of the Executive Committee of The Association of Northern, Kimberley and Arnhem Aboriginal Artists (ANKAAA). A primary function of the ANKAAA charter is to protect the rights of artists and promote ethical business practice in the Indigenous art industry.

Peggys paintings are delicate in colour and style, almost photo quality in execution. She uses natural ochre pigments with immaculate fine brushwork to depict her Traditional country. Peggys quote – Thats the spirit, still alive in my country. I paint this country because I know it and because I want other people to know this is my country.

Her list of collections and exhibitions is impressive  Peggy was the first Indigenous artist to win the Fremantle Print Award in 1995. In November 2008, six very large works by Peggy were showcased in the prestigious East Meets West exhibition in Perth, Western Australia. The paintings depicted her traditional country in the Keep River National Park area, on the border of Western Australia and the Northern Territory. At the opening, one piece was immediately acquired by Parliament House Collection, Canberra.