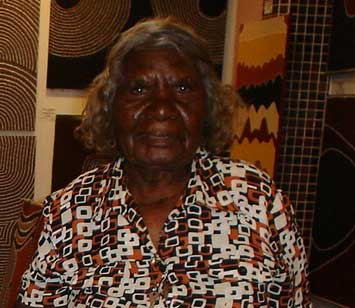 Nora was born on Turner Station, south of Purnululu in the East Kimberley. Her full sister is Phyllis Thomas, also a senior artist at Turkey Creek (Warmun).

Nora worked on Turner River Station as a youngster, carrying out the normal station duties of feeding and looking after the nanny goats, then domestic duties as she became older.

Nora is a specialist dot artist and her medium is bush ochre. The technique she uses is unfortunately becoming more difficult to acquire, as the younger artists prefer the main landscape painting. The content of her paintings consists of Turner (Kartang Rija) and Purnululu to Turkey Creek. Her knowledge of the land from her early days of walking through it with her family is extensive and her artworks reflect this.

Nora now resides at Warmun Community and her paintings have been collected all around the world. She participates in Group Exhibitions, and her works are popular as they reflect traditional dot art beautifully executed.