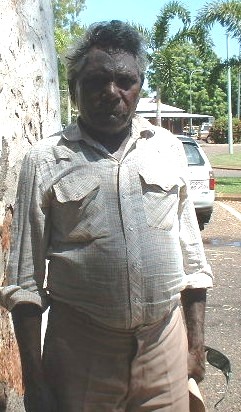 Ned was born at Wave Hill and grew up to become a stockman on the station like most in his profession, he travelled extensively and worked on Argyle, Lissadell, Carlton, Texas Downs Stations and over the border in the Northern Territory. He was a drover and travelled to Queensland.

His grandfather was Vincent Lingarri who led the famous ‘walk off’ which resulted in the Whitlam Government handing over the station to the Gurindji people. This was the first of many cattle stations to be returned to Aboriginal people.

Ned tells of his time as a Police Tracker at Police Hole in the N.T. -  he preferred to go out alone, as he says he could always get the boys’ confidence and bring them back if others were with him, they would run away and make it worse for them.

When working at Argyle, Ned was bringing back some bulls and a horse rolled on him.  He was taken to Wyndham Hospital he did not comment, but it would have been a very painful trip and old Doctor King had him airlifted to Perth. Ned still has the steel plate in his leg to this day, but he returned to riding for many years after the accident.

He lives with his wife Maggie at Emu Creek Community via Kununurra.  Unfortunately, due to an accident which rendered him blind in one eye, Ned can no longer paint the intricate ochre dot-art for which he was so well known.  Not one to sit down, he now paints landscape in ochre, with strong imaging and meaningful stories.