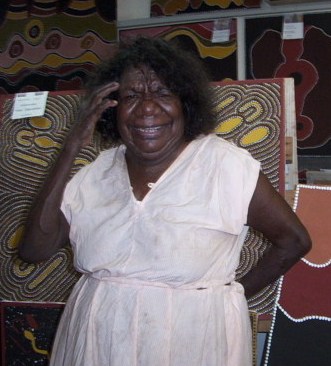 >Nancy was born at Cherabun Station via Fitzroy Crossing c. 1940 then relocated to Parcel Downs Station, where she worked in the station homestead and was also stock camp cook. She returned to Cherabun, then further north to Derby in the Kimberley Region of Western Australia.

She prided herself that she always had a job she had five children and six grandchildren from her one surviving boy.

Nancy met her second husband Danny Wallace in Kununurra. Danny passed away in 2005, however Nancy remained at Emu Creek Community via Kununurra until she passed away 2007. Her work is now commanding excellent prices landscapes in distinctive style and liberal use of ochre.

Her early painting style was extremely strong, but in latter years she favoured the softer tonings in ochre, always depicting her desert homelands. Nancy has exhibited with the best of the Senior Ochre artists of the Kimberley.