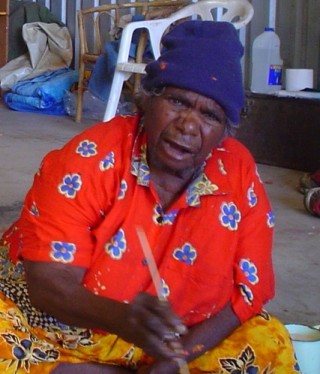 Naata Nungurrayi was born c. 1932 in the vicinity of Kumil, to the west of the Pollock Hills in Western Australia. She is a Pintupi speaker and a highly regarded cultural Law Woman.

She participated in the Kintore-Haasts Bluff collaborative canvas project in 1994 and commenced painting for Papunya Tula Artists in 1996. Naata currently lives in Walungurru with her sister Nancy Nungurrayi who is also a highly sought after artist. Her brother is George Tjungurrayi and her son is Kenny Williams Tjampitjinpa, both international artists.

Naata is famous for her bold linear style, the dense use of painting medium and the radiant and richly textured surfaces of her work. The Dreamings that Naata paints are traditional designs associated in the main with the Tingari themes, depicting sacred women’s ceremonial sites, the performance of their dancing and the designs painted on the upper part of their bodies for Women’s Business (Law).

It is understood that the Tingari are a group of mythical characters of her people’s Dreamtime who travelled over vast stretches of the country, performing rituals and creating particular important sites. The Tingari women usually followed the Tingari men, accompanied by novices. It is the Tingari men and women’s travels and mystical deeds that are enshrined in a number of song, dance and story cycles. Naata is one of the few women having sufficient tribal hierarchy and family lineage to inherit and have permission to paint aspects of this important story. Tingari is normally painted by men.

Naata’s artworks have been accepted in the National Aboriginal and Torres Strait Islander Telstra Awards every year since first being entered in 2000 an incredible recognition of the standing of this artist. She was also named among the Top 50 of Australia’s Most Collectable Artists in Australian Art Collector January March, 2004. In 2003, one of Naata’s paintings appeared on an Australia Post stamp special edition titled Art of Papunya Tula.

Naata is represented in major public and private collections throughout Australia and overseas.