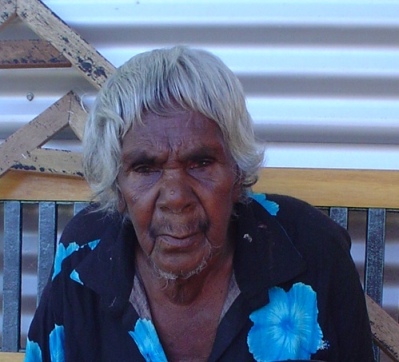 Minnie Pwerle was born prior to 1920 (c. 1910) on the banks of the Sandover River, 350 kilometres northeast of Alice Springs. Her country was Atnwengerrp and her language was Anmatyerre and Alyawarr. Minnie was one of six children and went on to become the mother of seven children including International artist Barbara Weir. She passed away peacefully 18th March 2006 at her home in Atnwengerrp with her family.

Minnie commenced painting on canvas in 1999 – and was immediately noticed by Galleries and Collectors worldwide – after a lifetime of ceremonial body painting. Body paint designs are worn to represent Dreamings and various symbols are specific to particular rituals. Minnie then started painting batiks in the 1980’s completing works for the Robert Holmes a Court Collection.

Minnie’s paintings reflect her country, the bushtucker so important to her desert heritage and the women’s ceremonial body paint inherent in her culture.

The circular design of the Bush Melon and the patterned lines of the Women’s body paint are presented in bold and striking colours reminiscent of the late Emily Knwarreye’s later works, and those of the Batik designs in which Minnie was involved.

Minnie lived most of her life at Atnwengerrp (pronounced a-noong-a-pa), her country her sisters Emily, Molly and Kayla live close by. Teresa Purla, her granddaughter also lived near Minnie and helped look after her. Her family from Alice would often go out to kill kangaroo for her and make sure she had everything she needed.

Minnie has been included in the 50 most collectable Australian artists by the Australian Art Collector two years in a row (Issue 27, Jan Mar 2004 and Issue 31, Jan March 2005).

A strong lady who executed strong, collectable works. As a family friend remarked after her passing she brought colour to our lives.