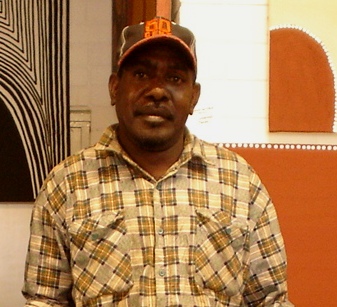 Mark was born in Derby in 1968. He currently resides in Kununurra and is former Chairperson of the Warmun Art Centre.  Mark is well educated and an incredibly talented Traditional ochre artist.  His charcoal sketches and figurative acrylic works are testimony of his ability in any sphere/medium of artworks.

He has been taught the stories of his land by his mother, artist Nancy Nodea, and paints her country, Texas Downs, and his father’s country around Cherabun Station. Mark’s father is Hanson Boxer, a Walmajarrie man, and this enables Mark to extend his content to embrace both Kitja land and his father’s country around Yakanarra (an excision of Go Go Station via Fitzroy Crossing) and Cherabun Station. His minimal and sometimes flamboyant style gives him scope for large works. He is undoubtedly one of the most naturally talented Australian artists.

Mark’s design won the 2002 Royal Australian Mint International Award for Pure Silver Collector Coin. The Royal Australian Mint has only released ten such coins since 1983.   He has participated in Group Exhibitions and his first Solo in September 2003 at the prestigious Alison Kelly Gallery in Melbourne was a sell out success.
Selected Exhibitions 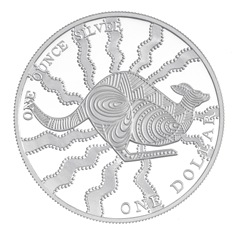