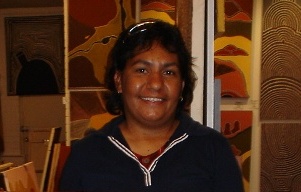 Marcia was born in Derby 1971 and grew up initially in Halls Creek, then Wyndham.  Her father Harold Rivers is Chairperson of Whataguttabe Community, an excision of Lansdowne Station in the East Kimberley, which was originally settled by Rod and Edna Quilty.  This land forms the content of many of the artist’s works.  Marcia is married to Dallas Purdie, son of Senior Ochre Artist Shirley Purdie, and Marcia has extended her knowledge of the country and the Ngarrangkarni (Dreaming) stories of her Kitja Elders from both Shirley and Shirley’s mother, the legendary Madigan Thomas.

Marcia and Dallas and their five children live at Turkey Creek (Warmun Community).  Marcia is well educated and has always been involved with Community affairs.

She has natural talent nurtured by the Elder Artists, and is fiercely proud of her technique and individual painting style.  She is meticulous in method and executes strong works, favouring the thick bush ochre in minimal colours.

Marcia’s first Solo Exhibition was in 2001 – held by Indigenart at Art01.

She has participated in many Group Exhibitions with Senior and Contemporary Ochre Artists including:-

The Artist is dedicated, her talent already proven and her works can only become even more highly sought after in the marketplace.