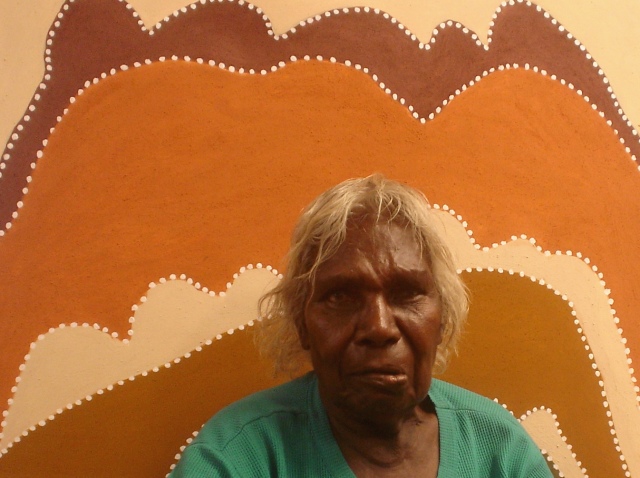 Madigan is the epitome of a strong Kitja Law woman.  Born on Violet Valley Station just south of Warmun, she has always been a worker.  As a child, she assisted the women with yard and domestic duties around the station, and learnt from her elders the very depths of her culture which remain with her today.

On moving to reside on Mabel Downs Station after Violet Valley became an outstation (her son Bruce has now converted Violet Valley (Baulah-Wah) back to a working cattle station), she assisted her husband Sandy, who was a stockman.  Madigan rode with the men, mustered the cattle and undoubtedly kept up with the best.

She educated her children whilst living in Wyndham and gave them the benefit of higher education demonstrating how astute this lady is she knew the importance of this and her children have succeeded, with Ethel becoming a teacher and later C.E.O. of Warmun Community, her son was the former Chairperson of Warmun Community, her eldest daughter, Shirley Purdie, a famous artist in her mother’s footsteps is now the present Chairperson of Warmun, and in turn Madigan’s grandchildren are succeeding in their chosen professions.

Madigan and Sandy’s community is Violet Valley, her home country and, whilst living at Warmun Community with Shirley, spend as much time as possible at Violet Valley.  When Madigan paints her home country, the works are invariably softer than her often strong style, and one can only assume that here is where she relaxes.

She is a strong woman speaks her mind freely and directly still believes in her Traditional woman’s law, particularly in relation to young girls she demands respect and it is given freely.  The 1970’s saw the establishment of the women’s painting movement..championed by Queenie McKenzie and Madigan Thomas. These two women are mentioned very often in the same context as Rover Thomas and Jack Britten.

Madigan’s style is wide and varied from delicately dotted landscapes to vivid angry’ black lines of the opencut diamond mine on the Women’s Sacred Site,  to extremely clever sketch paintings of animals like Jack Britten and all great artists, Madigan can sketch Kartiya (whiteman) style.

It has been written that Madigan’s style of painting is characterised by various pathways and dreaming tracks that meander through the painting.   To view the paintings aesthetically they are flowing, sometimes simplistic and sometimes detailed; however, they invariably portray or show the whole story.

Madigan has participated in many exhibitions and was a finalist in the 1994 National Aboriginal Art Award, her paintings are much sought after and she is never seen to produce other than a really excellent piece of art.  Madigan is considered by many experts as one of the most important contemporary painters of our time.

1996
    Figures in the Land, National Gallery of Victoria, Melbourne 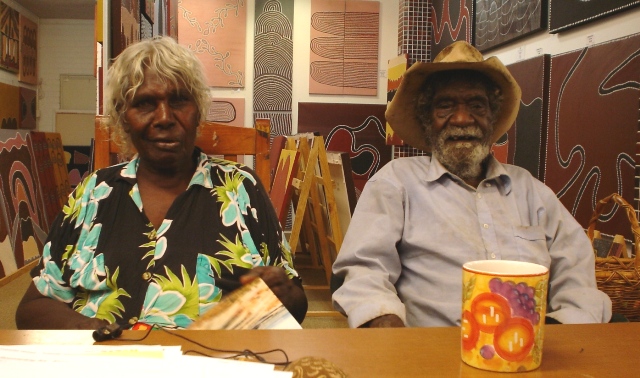