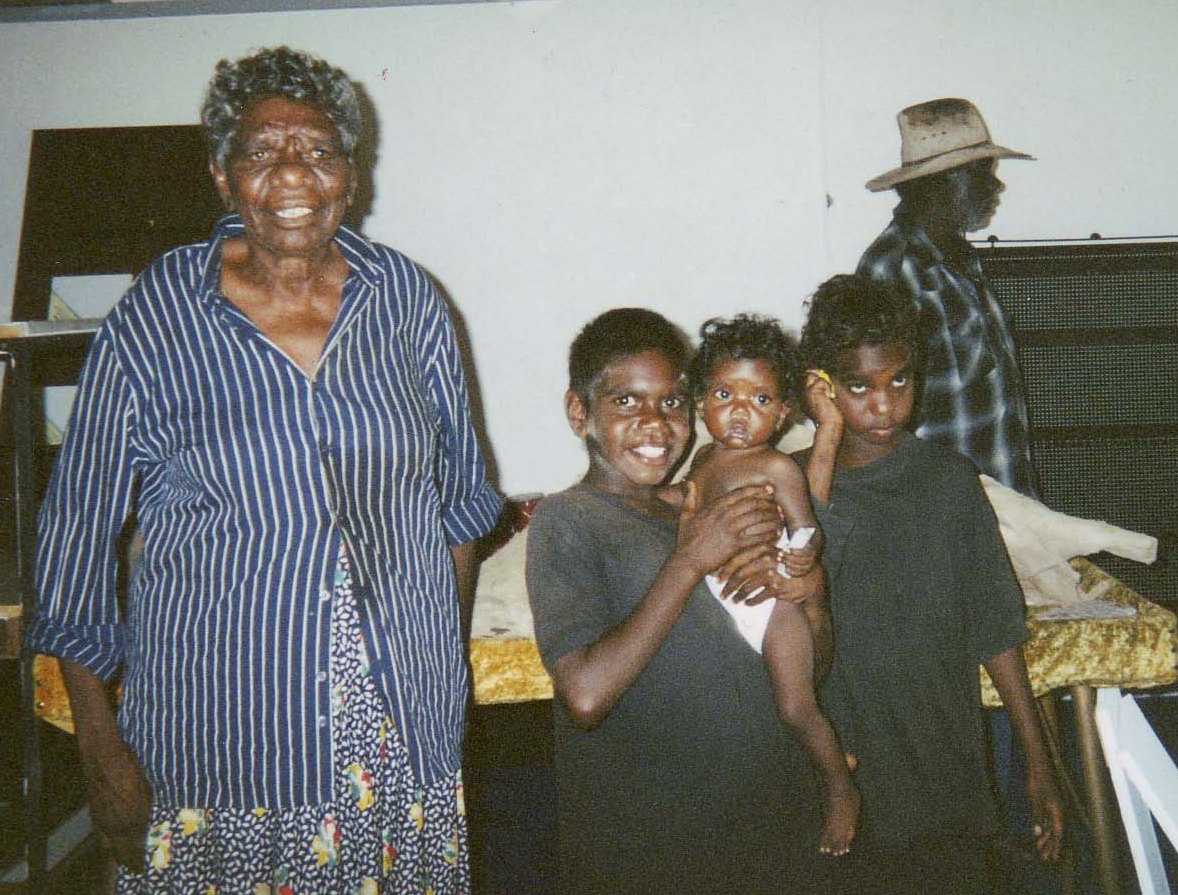 Photograph taken during a visit from Emu Creek to Kununurra 2001
Nellie Gordon, George’s young relatives and George in background

George Wallaby was born in the bush near Lake Gregory on the northern edge of the Great Sandy Desert region of Western Australia c. 1930. He was a Walmajarri speaker, the traditional language group that lives in this remote area. George joined his contemporaries at Billiluna which was already established, with family housing and schooling for the children available.

George was a stockman, worked the Canning Stock Route with the renowned Wally Dowling and Bill Morris droving cattle to Willuna. He worked on a number of cattle stations in the Kimberley, including the famous Argyle Station, owned by the Durack family. The country over which George travelled during his working days as a stockman/drover included almost the whole of Western Australia from Wyndham to Broome in the far North to Kalgoorlie in the South. George believed there was always a job for a good boy on the stations, Aboriginal or Whitefella, and he worked hard all his life.

After his days as a stockman, George relocated to the fledgling township of Kununurra, where he worked on farms in the area.  He was a well-known and respected man, quietly spoken yet charismatic and very popular. Many of the early residents of Kununurra still speak fondly of him, recalling his loyalty, sense of humour and hard working nature. George retired to Emu Creek Community, via Kununurra with his wife Nellie Gordon, also a Senior International artist.

Following in the footsteps of his father, George was known as the Rainmaker’ and was a senior law man of his people. George’s Dreaming (Totem) was Floodwater, his Bush name Borragoo refers to Lake Gregory, his birthplace.

George began painting in 1998, and though living in Kununurra, painted his homeland of Sturt Creek and Lake Gregory. The content of his works depicted the cultural significance and dreamtime history of the Lake, and the arrival and effect of the early white settlers in the area. He leaves a legacy of artworks indicative of a huge expanse of land, from Sturt Creek which begins in the Northern Territory and flows via Purnululu National Park in Western Australia, right down to Lake Gregory in the Great Sandy Desert.