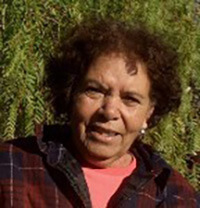 Barbara was born in c. 1945 at Bundy River Station, Utopia. Her country is Atnwengerrrp and her language is Anmatyerre and Alyawarr.

Barbaras mother was the acclaimed artist Minnie Pwerle (dcsd. 2006) and her father was Irish. Barbara was raised by her aunty, Emily Kame Kngwarreye who went on to become the most celebrated painter of the Utopia Movement and Australias best known desert artist. When Barbara was 9 she was taken into care by Native Welfare (children taken at this time are now known as the Stolen Generation).

Barbara was fostered out to various families in Alice Springs, Victoria, and Darwin. During this time she lost contact with her family but vowed to return and re-claim her heritage.

In the late 1960s she returned to Utopia with her children. She re-learnt the languages and her culture and re-established contact with all her family including the late Emily Kame Kngwarreye and her Grandfather Quartpot Akemarr. Being exposed to many artists at Utopia, in particular Emily, Barbara in the early 1990s developed a profound interest in painting.

In 1994, Barbara, along with a small group of artists from Utopia, travelled to Indonesia to learn more about the art of batik. The Utopia women were well known for their beautiful batiks and this contributed to the Aboriginal community buying back the region of Utopia in 1979. Barbara returned full of ideas for developing her own creative painting style. She began work with her son, Fred Torres. In 1996, Barbara travelled to Paris and Switzerland at the request of a European Art Gallery owner who commissioned some of Barbaras work. Private collectors quickly purchased every painting and this proved to be the turning point in Barbaras artistic career.

After Emilys passing in 1996, Barbara concentrated on developing her skill as an artist and soon attracted the attention of collectors by producing works that were very contemporary in style. It was not long before her paintings were drawing rave reviews. In 1996, Barbara travelled to France and Switzerland to paint solely for private collectors. All works were commissioned and immediately sold.

Barbaras dreamings include Bush Berry, My Mothers Country, Awelye and her famous Grass Seed dreaming. Barbaras artworks have been exhibited extensively throughout Australia and the world, including Japan, America and Europe.

Barbara is a well documented artist and has featured in numerous publications and in 2004 was chosen by the Australian Tourist Commission to appear in an advertisement titled Barbara Weirs Australia. Barbara currently resides in Adelaide with frequent visits to her mothers country, and is continually seeking new ways to illustrate her Aboriginal heritage. She is one of the most exciting Aboriginal artists to emerge into the world of mainstream art.

Exhibited extensively in Europe in 1998 including: