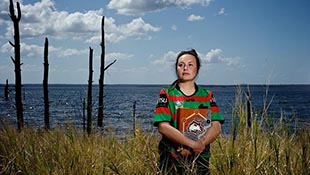 After 43 years in the wilderness, The South Sydney Rabbitohs broke through to win the NRL grand final 30 – 6 over Canterbury Bulldogs last weekend and there was very much an indigenous touch to the victory with Australian Great Cathy Freeman speaking with the South Sydney players prior to the game and champion Greg Inglis playing an important role in the win!

Now 1 indigenous artist has commemorated the victory with an amazing artwork! Click “Read More” to view the article thanks to SMH

At the centre of a beautiful piece of indigenous artwork sits a big white bunny rabbit, looking perfectly at home. An indigenous landscape and the logo of rugby league’s most famous club – it just looks so right.

The piece was painted by 18-year-old artist and South Sydney fan Karlie Stewart, who was commissioned by Fairfax Media to celebrate the Rabbitohs making the grand final for the first time since 1971.

Stewart, who lives in Maroubra, came up with this stunning painting, called Glory through the Nations, to capture the excitement the Rabbitohs’ march to the grand final has created in communities throughout Australia, from the ochre desert country to the blue saltwater country to the black and white maze of the city.

And the tracks of green and red dots connecting it all?

“That’s the glory running through the homes of people who support Souths,” Stewart explains.

A Yuin Nation woman, Stewart has been a Souths fan “forever, ever since I can remember”, despite coming from a family of Eels supporters. But as well as the team’s recent on-field successes, Stewart is also proud of the Rabbitohs’ Aboriginal history and is inspired by the community work of superstars such as Greg Inglis.

And she believes all teams help promote racial harmony, breaking down barriers by uniting players from different backgrounds. “That’s your team and they’re your brothers,” she says. “You’re playing sport, and you’re doing it for each other, regardless of race.”

Stewart, who plays “pretty much anything with a football in it”, attended Matraville Sports High School, the old stomping ground of Souths halfback Adam Reynolds and centre Dylan Walker.  But she has another, deeper connection to the club. After she was kicked out of home at 13, she spent years either living with friends or in refuges in Bondi and Erskineville.

It was club charity Souths Cares that gave her a mentor, former Rabbitohs fullback Rhys “Lightning” Wesser, who she now counts as a friend.

Wesser encouraged her painting and remains only a phone call away when she needs to talk about problems.

“Aboriginal kids, they graduate school and then they’re kind of just sitting there and that’s when they get into crime, drugs, alcohol, and it’s all distraction,” Stewart says. “Souths Cares have educated me to be more ambitious to be something and do something with myself. They’ve given me opportunities to make things happen.”

Her favourite Souths player is winger Alex Johnston, who she rates as “really smart” as well as being a top footballer. “A lot of the younger boys these days go through school thinking, ‘Oh, I don’t need to know this and that because I’m going to play football forever’, but he’s got a good head on his shoulders,” she says.

Stewart’s artwork has inspired other Matraville students to take up painting, including her 15-year-old brother Braeden.

“He’s a footy player through and through, he’s playing right now,” she says.  “But sometimes you’ll catch him sitting there drawing, all Aboriginal designs, and he’ll be so happy. It makes you happy because you want to see your family succeed and do well and I know he’s got that back-up plan. He gets that from me, looking at me and saying, ‘I want to do what she does’.”

Stewart says she is restless by nature. But seven years of placing dot upon dot has taught her patience – a virtue some Souths fans have been practising for the past 43.

To purchase a print of Glory Through The Nations, with all profits to go to Souths Cares, go to smhshop.com.au/art/souths.