Having spent a month on the amazing island off of Spain known as Ibiza, I found it very interesting to see the following article! It’s amazing the places that Australian Aboriginal Art turns up in!

The richness of the Australian Aboriginal arts and culture comes to Ibiza, with exhibits and workshops. A rare and privileged opportunity for islanders. 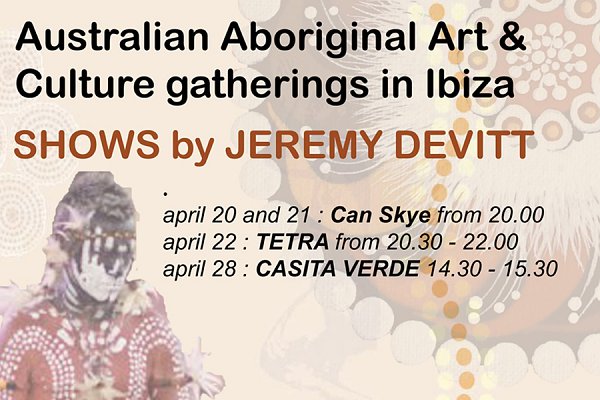 In some circles, with pride and a smile, it is said that Australia is the largest island in the World. Ibiza by comparison is smaller than many of the farms (stations) found in Australia!

Australia is also famed for her indigenous people, the Aborigines who have inhabited the land long before it was ever discovered by the Western societies. The culture, art and stories of the aborigines is fascinating but usually a (very) long flight away to witness, participate and explore in-depth… until now.

Dreamweb, founded by Lucien Lecarme, is an Australian Aborigine platform that spans the World, bringing the richness of the Australian Aboriginal ways to all. Across the last fifteen years Dreamweb has been instrumental in both educational programs for children and events for adults internationally, whilst never losing direct contact with the Aborigine peoples of Australia.

This year, for the first time, Dreamwebs is on Ibiza and offering a series of events for all ages. Workshops and exhibitions will feature throughout the summer.

Australian artist, Jeremy “Mudjai” Devitt, who has toured throughout the World with his stunning art will be exhibiting throughout the summer and holding workshops, teaching the source of aboriginal art through storytelling, dance and games – just as they would in Australia.

Lucien Lecarme, founder of Dreamwebs will also be exhibiting – sharing both Aboriginal artefacts and photographs of his own journey with the Aboriginal people across the last twenty plus years.

The seasons exhibit opening takes place Friday, 19th April from 4pm at Can Skye – events times, updates and locations (which do vary throughout the season) can be found here – Aboriginal Ibiza

Herein, this author begs pardon with a small digression. Australian raised herself and indeed having lived in Aborigine communities, I can but offer that such exhibitions and workshops should be both entertaining and enlightening – not to mention a rare and privileged opportunity on Ibiza.