The exact origin of Aboriginal art is extremely difficult to date but it has definitely been over 40,000 years in the making.  Over time, Australian and worldwide attitudes towards Aboriginal art has changed. It is considered to be a language in itself and contains stories of the Aboriginal people. The art varies in tangible visual art styles such as paintings, sculptures, carvings and engravings.

There were over two hundred and fifty distinct types of languages within the Aboriginal societies before the settlement of the Europeans. Today, sixty of those languages survive and the culture was preserved through the expression of art and religion. During the 1960s, the Australian government moved many different groups living in the Desert region into the Northern Territory community of Papunya. These were made up of the Pintupi, Walpiri, Luritja, Anmatyerre and Arrernte language groups. The purpose behind this move was to free up cattle land and to somewhat force the Aborigines to assimilate into Western society.

In the early 70’s, a school teacher, Geoffrey Bardon gave Western acrylic paints to men in the community and they painted a mural on the school wall using the body and sand ceremonial art technique. Historically, this type of art was used by the Aborigines for spiritual purposes and depicted ‘Dreamtime’ world creation stories. The mural was heavily criticised by many, especially elders who felt that the art was not appropriate for children. Later on the administrators of the school, who were of European descent, painted over the mural. This raised great attention Australia wide and marked the start of the ‘Papunya Art Revolution’ and the beginning of the growth of Aboriginal art. 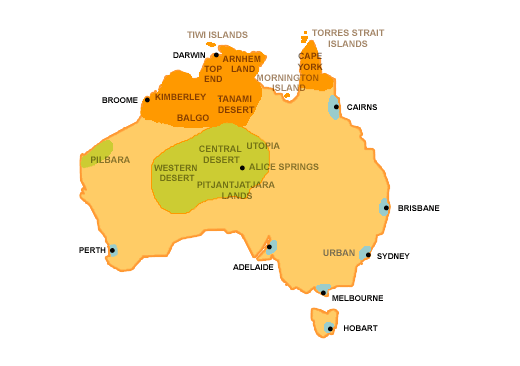 Papunya Tula, a collective group of artists, was formed by the Aboriginal men of Papunya in 1972. One of the earliest paintings from this group was by founder Johnny Warungkula Tjupurrula. This extremely intricate artwork was filled with calligraphic patterns and over dotting which hid secret and sacred elements of dreaming stories.

About 20 years later, the group expanded to include female artists who prior to this time, helped their husbands and relatives with the intricate dotting of the artworks but were not credited for this work. The name tula came from a hill located near Papunya, where many Aborigines had been relocated to by the Australian government. They were very secretive and protective over their art since it was considered to represent their sacred heritage.  Due to the social context of Aboriginal art, it had always been extremely difficult for non-Aboriginal people to gain access to Aboriginal art.

In 1976, the Aboriginal Land Rights Act was established and many of the people left the Papunya region for their original lands. Even in the midst of that historical change, the art continued to thrive amongst the people. The viewpoints towards the art made a shift from being completely ignored to being recognised in National museums and by serious art collectors. There seemed to be a new found appreciation for what was considered ‘primitive’ art. The art was displayed in special ethnographic museums for many years and took a long while to be accepted into mainstream galleries. This shift came about during the early to mid1990s.

Aboriginal art has made an interesting transition from being completely disregarded as valuable to those outside of the Aboriginal culture, to being considered as high or fine art through international recognition.  Today, the placement of the art still varies from being hung on the wall of a petrol station to being sold in an expensive commercial art gallery.

There is an estimated 5000 to 7000 Aboriginal artists today. Most of them live in remote locations in the Western desert, Central desert, far north and western areas of Australia. Individuals can visit museums and galleries in many countries and attend major annual art shows to see the beautiful works of creation with their own eyes.